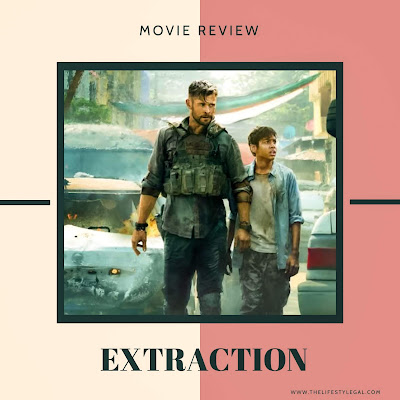 Extraction premiered on Netflix on April 24th and I and my sister jumped on the bandwagon of other night crawlers to watch this movie. This also came with the peer pressure from the hype and buzz the movie was getting from Twitter, so as expected two young ladies in this quarantine/lockdown period covered up and joined Chris Hemsworth (Tyler) in the rescue of Ovi.

Extraction is based on a graphic novel “Ciudad” written by Joe Russo (in the novel it was a female character Eva Roche that was rescued by Tyler). Chris Hemsworth doesn’t have his mighty superhero hammer to swing in the air this time, in this movie he still plays the superhero part as a mercenary for hire named Tyler Rake.

In this Netflix movie, heads are treated terribly bad, broken bones protrude and a fractured nose that needs immediate restructuring, while bodies are being flung from buildings like pancakes, and bullets flying in the air. Not that I’m complaining about the bodies being flung like pancakes in a pan, possibly what gives the viewers the adrenaline rush to continue watching this movie but they should have made it somewhat realistic!

The title of the movie involves Ovi Mahajan (Jaiswal Rudhrasksh)son of an imprisoned Mumbai gangster who’s kidnapped by his father’s rival, Amir and has to be rescued. Mahajan can’t pay the ransom due to his frozen accounts but goes ahead to hire Saju, but his syndicate still hires Tyler to rescue his kid. The percentage for failure for the mission is high, Tyler needs the money and possibly has a death wish. I mean he kept having flashbacks of his dead son, maybe he wanted to join him no?

The film tricks in extraction was too stretched. Tyler wasn’t moved even in extreme danger, he never missed a shot too. What pills did he keep popping at every interval? Did he have a health issue? We never found out. Asides having a longtime friend who helped him then betrayed him for 10 million dollars, he got a soft spot that comes out when the mission doesn’t go as planned. He refused to abandon Ovi.

Saju, who’s running his own extraction plan at his boss’s request doesn’t give Tyler any breathing space as he wants to get hold of Ovi while leaving so many dead bodies of Amir’s men.

Amir is a plain power hungry sadist who has his henchmen fling children off buildings (yes, like pancakes off the pan) when he’s not hiring them as killers.

The movies attempt to generate sympathy for Tyler’s predicament comes off like an objective exam as Ovi asks him one question after another about his past while Chris Hemsworth tries to be macho and sentimentally wounded. He almost pulls it off though.

Now there’s a character pop, Gaspar who’s a fellow mercenary and  “owes Tyler his life.”  His character brings a shocking plot revelation that the script doesn’t have the courage to further address.

Extraction with its intense, well-staged gun battle on a bridge blocked by Amir’s henchmen gives us  a brief flash of this action at the beginning of the film, with Tyler taking several bullets and dragging his bloody body across the bridge. At every scene of the extraction movie, we have guns shooting and heads rolling.

There are armed kid villains too, Amir’s men or lets call them boys who attack Tyler but he just beats them up. You can’t blame him for that; they’re trying to kill him! They are ready to give up their fingers if they fail in doing that too!

What was Tyler doing by the poolside after being shot in the neck and jumping off the bridge?

I’d rate this movie a 4/10 as most of the scenes where quite unrealistic and it felt more like I was watching an action-comedy then an actual action movie. Maybe it was the Indians? Oh well…

Have you watched “extraction” yet? What do you think about the movie? Let’s discuss in the comment section.

10 AFFORDABLE FUN THINGS YOU CAN DO THIS WEEKEND

SQUID GAME | 10 Life Lessons I Learned From The K-Drama

Don’t Miss Out On The Latest Updates!