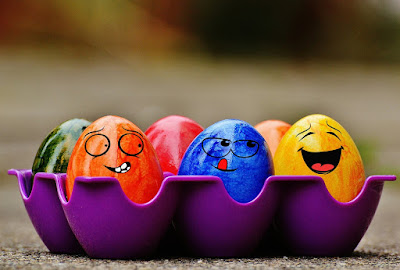 It’s Easter! A time of celebration, and merriment as we celebrate the resurrection of Jesus Christ. I’d love to believe I’m not the only one who wonders what the relationship with Easter celebrations and eggs have in common! So I did a little digging and I found something interesting, most people might know about this but for the sake of those that do not, I’d be sharing! 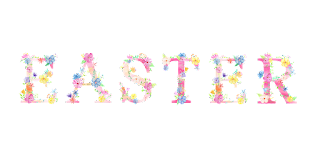 The egg, which is an ancient symbol of new life, has been associated with pagan festivals celebrating spring. But sharing from a Christians perspective, Easter eggs are said to represent Jesus’ emergence from the tomb and resurrection. Did you know that decorating  eggs for Easter is a tradition that dates back to at least the 13th century? Now you do! According to the explanation for this custom, eggs were formerly a forbidden food during the Lenten season, so people would paint and decorate them as they desired to mark the end of the period of penance and fasting, then eat them on Easter as a celebration.

Now we are done with history, let’s dig in to this beautiful piece by Jeff Smith. 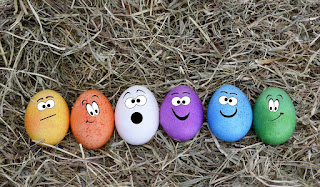 Once upon a time there was a family that lived on a farm. They were not making ends meet. It seemed that every time the farm was about to make money, some of the crops would die or some of the animals would get sick.

Joey and Anna were the son and daughter of the farm owner, Mr. Noluck.

One early Easter morning, Joey and Anna were playing in the field down near the stream. They were hunting for rocks to take down to the stream to try and skip across the water. This was one of the favorite pastimes. Joey was looking around the base of an old dead tree, when he noticed a small white rabbit. The rabbit hopped into a hole and disappeared. Joey and Anna sat around waiting for the rabbit for about an hour, but he would not come back out of his burrow.

As they were about to get back to looking for rocks to skip in the water, they noticed a bright green basket filled with candy and golden eggs sitting at the other end of the big dead tree log. They ran over and grabbed the basket. They ran home to show it to their father.

When they got back up to the house, Mr. Noluck was sitting on the front porch with a sad look on his face. It seems that all of his crops had died again this year. He was not a good farmer.

Mr. Noluck said, “Hi kids. What have you been doing?” “We were down near the stream looking for skipping rocks and we found this basket,” said Anna. “What is in the basket?” asked Mr. Noluck. “Some candy and some golden eggs,” said Joey. “That looks like some pretty good stuff,” said Mr. Noluck. “Do you think the Easter Bunny left it there for you?” he asked the children. He was trying to act interested even if he was upset about the thought of having to move back to the city and get a job in a factory. He really hated city life. That is why he had moved the family to the farm three years ago to try his hand at farming.

“Would you kids like some lunch?” asked Mr. Noluck. “Yes, we are really hungry,” said Joey. “Lets see what Mom has to fix for lunch,” said Mr. Noluck.

As they were sitting eating their sandwiches, the phone rang. It was Mr. Crook, the mean man that ran the local bank. He said he needed to come by and get some money from Mr. Noluck to pay towards the loan he had on the farm.

“What should we do? Mr. and Mrs. Noluck asked each other. They knew they did not have the money that Mr. Crook was hoping to get from them. “I guess we will have to sell the farm,” said Mr. Noluck.

“Maybe we can give him one of the golden eggs from the Easter basket,” said Joey. “What Easter basket?” asked Mrs. Noluck. This caught the attention of Mr. Noluck, as he had thought that Mrs. Noluck had been the one to put the Easter basket, which the kids found, in the field. “Let’s take a look at those eggs,” said Mr. Noluck. Joey and Anna ran to the front porch and brought back the basket. Their Mom and Dad looked at the eggs. They each picked one up. They were heavy enough to be gold, thought Mr. Noluck. Maybe they were gold?

They decided that they would offer one to Mr. Crook in exchange for payment on the farm loan. They knew he would know if the egg was real gold or not, as it was rumored that Mr. Crook knew the taste of real gold or fake gold.

The doorbell rang. It was Mr. Crook. Everyone was scared. Would he accept their offer of the egg? Would the egg turn out to be real gold?

“Hello Mr. Crook,” said Mr. and Mrs. Noluck as Mr. Crook came through the door. “Hello folks. I am sorry to have to come out here asking for money,” said Mr. Crook. Everyone knew he was lying.

“I tell you what,” said Mr. Crook, “give me the egg and I can bite into it and tell you if it has any real gold in it.” If it has any gold, I will give you your money’s worth for the gold.”

Mr. Noluck handed the egg to Mr. Crook. Mr. Crook took the egg in his hand and held it up to his mouth. He bit the egg. As he did, his eyes lit up and got brighter than anyone had ever seen. “This is pure gold!” said Mr. Crook, looking very excited. Where in the world did you get it?”

“We got it in our Easter basket,” said Joey and Anna with big smiles on their faces.

“I will give you a thousand dollars for it,” said Mr. Crook, knowing it was worth far more than this. “It’s a deal, said Mr. Noluck. That will pay off my loan completely and give us some extra spending money.” Everyone in the Noluck family was very happy, because they knew they had a basket full of the golden eggs.

From this day forward, the farm was known as Lucky Farms instead of Noluck Farms.

Every Easter the Nolucks use some of their luckily found fortune to put on an annual Easter Egg hunt for all of the local kids in the town down in the field near the stream.

They have not been lucky enough to find another basket full of golden eggs, but they are always looking as the tale of the basket with the golden Easter eggs is not just a story, it is true.

I hope you enjoyed this post, while learning a thing or two! Do you have any Easter traditions? Please share in the comment section as I’d love to read them!

FRIENDSHIP BREAKUPS | Have You Ever Experienced One?

Don’t Miss Out On The Latest Updates!